Sunderland’s world famous crane-making heritage has been commemorated with the installation of the original Crown Works sign into the site around the Northern Spire bridge.

The old stone plaque from the Crown Works head office building has been installed into a wall near the southern approach to the bridge to mark the rich industrial history of the riverside site, which housed Coles Cranes for more than 50 years.

The dates on the plaque reflect two of the pivotal milestones in the history of the site and the heritage behind crane production in Sunderland.

Former workers from the site were invited to the unveiling and given the opportunity to look at the site around the bridge, where they once worked. 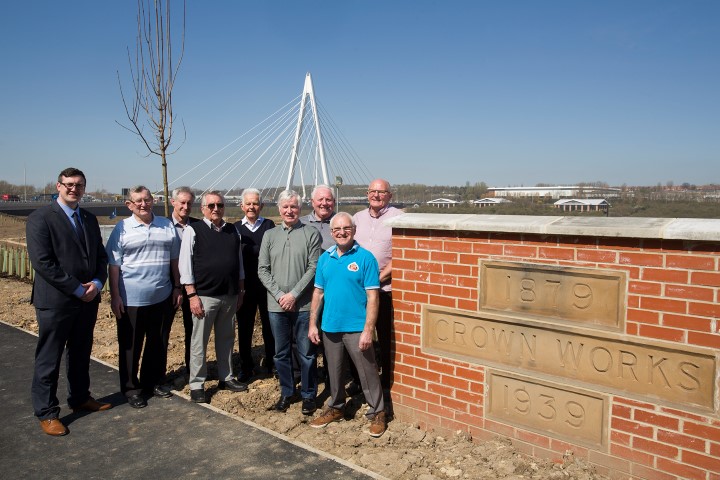 Peter Davidson, 77, from Fulwell in Sunderland, worked as an electrician at the site for 43 years, starting at 15 and completing an apprenticeship, and only leaving when the site closed in 1998.

“Crown Works was one of the biggest employers in Sunderland, so I’m delighted that it’s being remembered next to the site of the new bridge,” said Peter.

“I spent most of my working life here, and there were other people who worked at Crown Works for more than 50 years. There were whole families who were employed here, so the impact it had, and the memories it created, were great.

“We made life-long friendships and a number of us are still in contact and meet up.

“It’s great to see Northern Spire standing here now. Time moves on and I’m sure this bridge is going to breathe new life into the area. It would be wonderful if we could see this whole area bustling and used again for business and areas for people to live.”

The stone Crown Works name plaque was retained by Sunderland City Council when the old site buildings were demolished more than three years ago to make way for the new bridge.

In 1939, Steel and Co Ltd, ran by Sunderland brothers Eric and James Steel, bought the site with the aim of re-locating their newly-acquired business, Coles Cranes, there from Derby.

Henry Coles had started Coles Cranes in 1879. Steel & Co moved the crane production line to Sunderland in 1939 and named the site Crown Works, in recognition of the amount of Government works the expanded company was undertaking.

Steel & Co Ltd manufactured a number of different products but the crane aspect of the business remained under the recognised name of Coles.

The name was maintained until 1964 when there was a change of name to the British Crane & Excavator Corporation, and another change in 1970, back to Coles Cranes.

In 1972 the group was acquired by Acrow, but in 1984 Acrow collapsed and the operation went to American-owned Grove. The Crown Works plant was eventually closed in 1998.

Deputy Leader of Sunderland City Council, Councillor Michael Mordey, said the Crown Works plant played a major role in the industrial successes of the city’s past, so it was only right that it was remembered in some way.

“This huge riverside site beside Northern Spire was once a bustling industrial heartland, where thousands of cranes were manufactured before being exported around the world, so it’s only right that we commemorate it in this way,” said Cllr Mordey.

“Coles Cranes had a reputation as the largest crane manufacturer in Europe and, over the years, thousands of people worked here and thousands of families relied upon it for their livelihoods.

“Without doubt, crane manufacturing has earned its place in the Sunderland history books, along with shipbuilding, mining and glass-making. It’s wonderful to see that a little bit of the old has been incorporated into the new as Sunderland begins this fresh chapter with the building of Northern Spire.”

Northern Spire is the first bridge to be built over the River Wear in more than 40 years. It links Castletown to the north of the river with Pallion in the south and is part of a wider plan to improve the road network between the A19 and the Port of Sunderland and Sunderland City Centre.

It will reduce congestion and journey times around the city, attract investment and enable swathes of land along the river to be regenerated.

The How the Bridge Came to Life video, which summarises the three-year construction project of Northern Spire, can be viewed and downloaded here. The film tells the story since work began in May 2015 using a mix of timelapse footage, drone shots and interviews with people involved in the project.