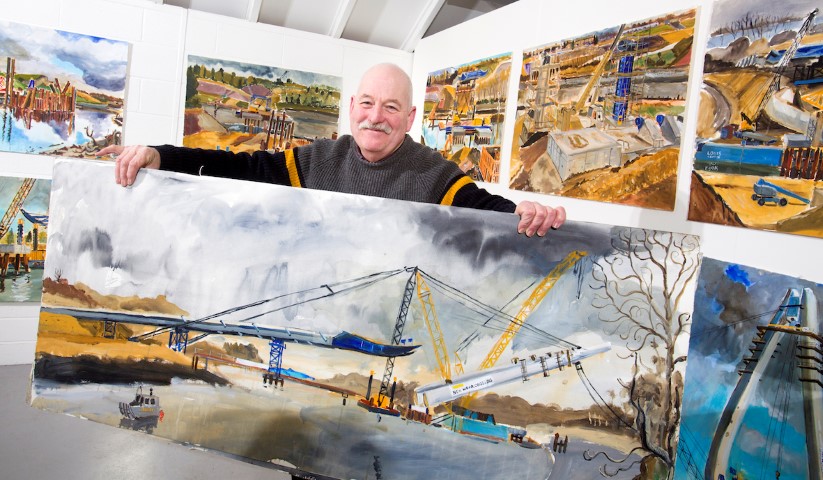 Talented landscape artist Robert Soden is renowned for capturing changes to the Sunderland skyline with his painting of architecture and urban life.

So when the construction of Sunderland’s new bridge across the River Wear got underway almost three years ago, he naturally set about recording its development.

Through rain, snow and sunshine, Robert has braved the elements along the banks of the River Wear to illustrate some of Northern Spire’s most defining moments. From the foundations being installed in the river, to the launching of the bridge deck, and then the raising of the striking 105m central pylon, Robert has painted it all.

Now, as we approach the opening of the cable stayed bridge, Robert has an impressive collection comprising 27 paintings of Northern Spire, which not only tell the story of how it was built, but show the gradual change to the city’s skyline. 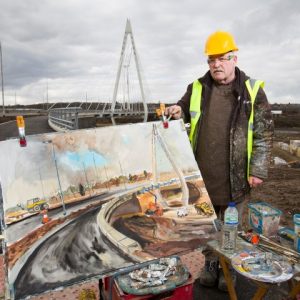 “I’m fascinated by architecture and civil engineering and have spent much of the last 25 years recording the many changes to the city of Sunderland,” said Robert.

“When construction of Northern Spire began, it was natural that I would want to capture its progress – after all, a construction project of this scale and complexity doesn’t come along very often. I have spent many hours sat along the banks of the River Wear painting the various stages of development. It’s an incredibly visual project, that’s changed enormously over time, so it’s been a wonderful landscape to follow.”
The people involved, the machinery, the colours are all fascinating to Robert, as is the outside environment.

“I like to capture the human element of architecture, illustrating how and where people carry out their roles, so Northern Spire has been quite fascinating,” he added.

“I usually paint outside, so the weather and light play an integral role in my painting, too. Obviously, during the past three years we have experienced all kinds of weather down by the river in Sunderland, both good and bad, but hopefully people will look at my works and feel that they bring a veracity and authenticity, as though they are standing in the landscape looking at the real thing.”

Robert’s interest in architecture and urban life began when he lived and worked in Rome in the early 1980s. However, he moved to Sunderland in 1991 and has gained much inspiration from the city’s development since then.

During his career he has exhibited his works all around the world, and has undertaken many commissions nationally and internationally. He recorded the engineering and tunneling works of the newly-opened Tyne Tunnel 2 in South Tyneside, and also produced 27 paintings of the Jubilee Line Extension Project for London Transport.

The highlights of his career include painting the aircraft hangers at the National Museum of Science and Industry in Wiltshire and, most recently, the restoration of the fire station in Sunderland for Sunderland Music, Arts and Culture Trust.

Northern Spire is the first bridge to be built across the River Wear in the city for 40 years.

It is Phase 2 of the Sunderland Strategic Transport Corridor, which is a five-phase road enhancement scheme to improve links between the A19 and Sunderland City Centre and the Port of Sunderland.

Phase 1, the city centre St Mary’s scheme, is already complete, and Phase 3, joining the bridge to the city centre, has recently received planning permission, and will get underway early next year.

Northern Spire will link Castletown with Pallion and will enable land along the south side of the River Wear to be regenerated. It will also attract investment into Sunderland, help to create jobs, and reduce journey time for motorists travelling around the city.

Final works, including painting, surfacing works, pavements and railings, are now being completed and the bridge is on schedule to be open later in the spring.
To find out more about Robert’s work, or to look at his Northern Spire collection, go to http://www.paintingsunderland.com