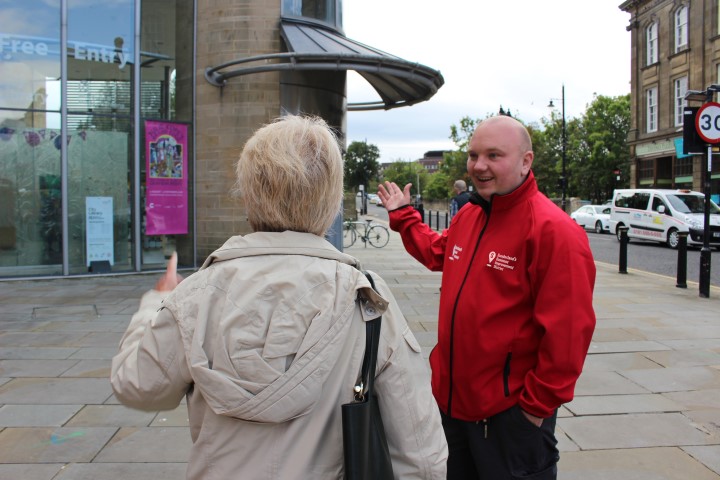 A NEW face is pounding the beat across Sunderland city centre in a new initiative from Sunderland Business Improvement District (BID).

James Denny is the city’s first SR1 Street Ranger and has been appointed by the BID to offer an extra level of support to businesses.

Based in the city centre, James – who is widely known as Denny – works as the eyes and ears on the streets and is the first port of call when businesses face urgent maintenance and cleaning issues.

Despite only being in his role for six weeks, Denny has already become a familiar face across the city, having engaged with numerous companies.

One of his first tasks was organising for kegs dumped behind a premises in Park Lane to be removed by Kegwatch, an organisation which helps the brewing industry by reducing wastage and theft of kegs, casks and gas cylinders.

He has also been working with the organisers of the Red Sky Ball to identify suitable locations across the city centre to install defibrillators bought by the fund-raising event.

“I’m basically the person on the ground, so if anyone has an issue which needs dealing with, I can get out to them quickly,” said Denny, who comes from a catering management background.

“A lot of what I do is general work like removing graffiti or picking up litter from private land and I’ve been meeting local businesses as part of getting to know the city and I’ve been getting a very positive response.”

Sharon Appleby, Head of Business operations at Sunderland BID, said Denny was a huge asset to the city.

“As soon as Denny started in his role, businesses began getting in touch. We are operating a reported and sorted approach so we can ensure what the businesses are asking for is being delivered,” she said.

“There has been a really positive response to him which is fantastic, as the SR1 Street Rangers scheme is something we have been keen to get up and running for a long time and it’s a project we want to expand moving forward.

“Our plan, should we be re-elected, is to appoint more rangers who can help work with our businesses to make Sunderland a nicer place to live and work.”

Denny will also be involved in helping distribute leaflets and other promotional material, along with meeting business owners to talk about opportunities to get involved.

He is based in the city centre and works normal business hours from Monday to Friday.

For further information on Sunderland BID visit the website: www.sunderlandbid.co.uk