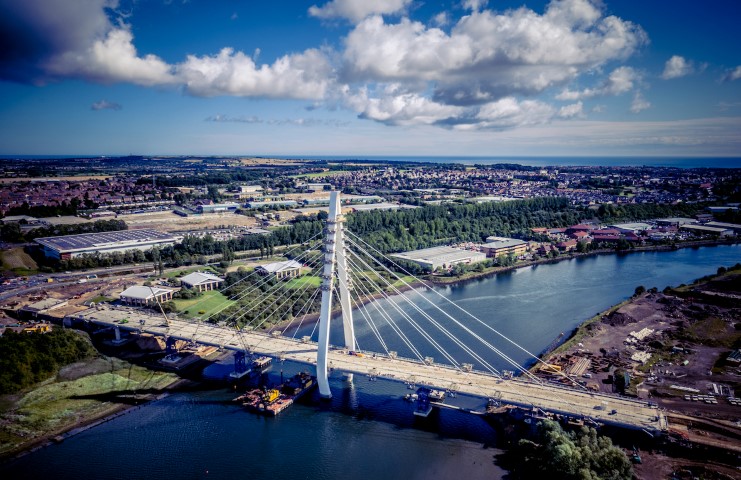 The majestic New Wear Crossing in Sunderland has passed its latest major milestone on its journey to completion with the installation of the cable stays.

Structural engineering company VSL International has now completed the final installation of the 28 cable stays, tensioning the cables to 50 percent of their design load, as work continues to finish the new bridge by spring of next year.

The next stage of tensioning, also known as stressing, will take place in October when the cables will be tensioned to 100 percent of the design load. That will allow the team to adjust and tension them just enough to lift the bridge deck off the blue steel temporary supports that were constructed in the river to take the weight of the structure.

Gradually, in the coming months, those temporary supports will be removed, leaving only the pylon and the bridge deck on display in the river.

Finishing works, such as road surfacing, paving, lighting, the installation of railings and carrying out road markings, must all be complete before the cable stays can be finely adjusted and locked off at the end of construction.

Stephen McCaffrey, Project Director for Farrans Construction and Victor Buyck Steel Construction, which formed a joint venture to deliver the project on behalf of Sunderland City Council, said he was pleased with progress.

“The installation of the cable stays has been a major, complex task, but it has gone to plan and on programme,” said Stephen.

“The cables have brought the bridge to life and enabled everyone to appreciate just how impressive it’s going to be and the impact it will have in the years to come.

“People could be forgiven for thinking the bridge is very close to opening as the structure looks complete from a distance. However, the reality is that we still have quite a lot to do, such as completing the road works on both sides of the river, getting the surface of the bridge deck finished and all of those additional works and safety features complete.”

Work began on the New Wear Crossing – Sunderland’s first bridge across the River Wear in more than 40 years – in May 2015.

It is Phase 2 of the Sunderland Strategic Transport Corridor, which aims to improve links between the A19 and Sunderland City Centre and the Port of Sunderland. The new bridge will also open up land for regeneration along the south side of the river, help to create jobs, and reduce congestion around the city.

During the first 18 months, much of the work centred around clearing the site in Pallion and Castletown, building the foundations, and fabricating and assembling the steel pylon and bridge deck.

However, this year, the bridge has become much more visible, with the 105m pylon being erected in February, the bridge deck launched across the river in spring, and the installation of the cable stays during the summer.

Sunderland City Council Leader Cllr Paul Watson, said: “The installation of the cable stays is a pivotal part of the construction of the new bridge because it means much of the temporary works that were built to support it can now be removed and we can start to appreciate just how impressive the New Wear Crossing is.

“Already, we can see that it’s going to be a beautiful addition to the Sunderland skyline and one that will have a profound impact on the city.

“There is no doubt that this bridge will signal change in Sunderland; change for the better. It will lead to regeneration along the southbank of the river, help to bring new jobs and investment, and show that our ambitions are great. It will show that Sunderland is very much open for business.”