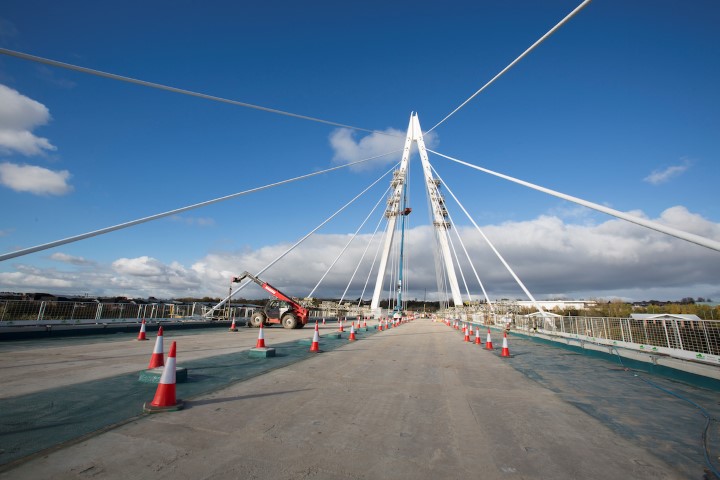 The New Wear Crossing in Sunderland has moved a step closer to completion this week with the cable stays now fully tensioned and taking the entire weight of the bridge deck.

Structural engineering company VSL International has stressed to capacity the 28 cable stays that connect the 105m-high pylon to the bridge deck, meaning the bridge is now fully self-supporting.

In the coming weeks, the team building the New Wear Crossing will begin the process of removing and dismantling the blue steel temporary supports that were built in the river to support the deck, as they are no longer required.

Scaffolding on the pylon is also being gradually removed, as Sunderland’s new bridge moves ever closer to completion in the spring of next year.

During recent weeks, the final 40m of bridge deck, on the north side of the River Wear, has also been in construction and will provide a permanent link between Pallion and Castletown when completed.

However, there is still a lot of work remaining, particularly to the bridge deck itself and both the north and southern approach roads, with road surfacing, paving, lighting, railings and other finishing works still to be carried out.

Sunderland City Council Leader Cllr Paul Watson, said: “Work on Sunderland’s new bridge is progressing very well, and while I appreciate there is still a lot to do, reaching the point where the whole structure is self-supporting is an important milestone and is exciting.

“Once the blue steel supports have been removed in the months ahead, only the pylon and the bridge deck will remain in the river, which will be tremendous to see.

“The bridge will be a striking addition to the city, but I think it will do far more than enable people to cross the river. It will bring a new confidence to Sunderland, will help to regenerate land along the river in Pallion, will assist in the creation of jobs, and will attract much-needed investment. A step change lies ahead for Sunderland.”

Work began on the New Wear Crossing – Sunderland’s first bridge across the River Wear in more than 40 years – in May 2015.

It is Phase 2 of the Sunderland Strategic Transport Corridor, which aims to improve links between the A19 and Sunderland City Centre and the Port of Sunderland. Phase 3 of the scheme was granted permission last week and will run from Woodbine Terrace in Pallion, where Phase 2 finishes, onto the city centre.

The new road will go through Deptford and will link into St Mary’s Boulevard, next to the Vaux site, opening up more development sites and opportunities along the river.

Work on the new dual carriageway will begin next year and is expected to be finished and open to traffic by the spring of 2021.

Martin O’Neill, Regional Manager for Farrans Construction, which formed a joint venture with Victor Buyck Steel Construction to deliver the new bridge project on behalf of Sunderland City Council, said he was pleased with progress.

“The tensioning of the cables so that the bridge becomes entirely self-supporting is a pivotal point in the programme,” said Martin.

“Members of the public will be unable to see any real difference now they are fully tensioned, but the cables have lifted the bridge deck off the blue supports, so we can begin the process of taking the supports down. In the coming weeks and months, the river will become less and less cluttered as we remove all of the temporary works that are no longer needed.

“There is still a lot to do, but we are now starting to look towards completion. We are on schedule to finish on time in the spring.”