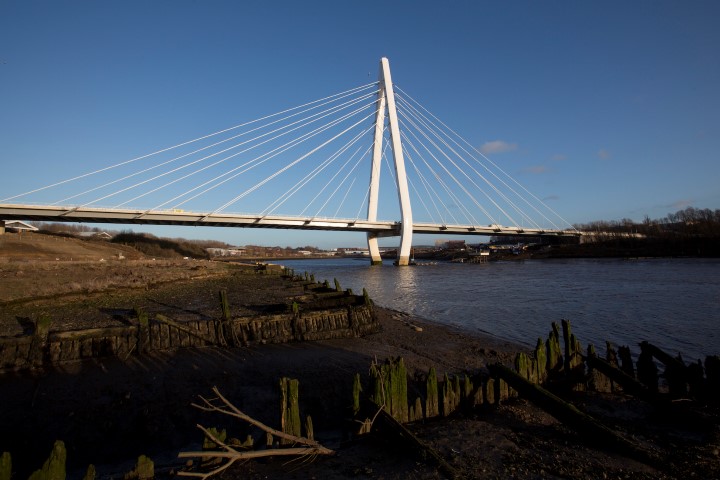 The opening of Sunderland’s new impressive bridge across the River Wear – Northern Spire – is nearing, after a long, challenging winter.

Finishing works on the cable stayed bridge, which boasts a 105m-high central A-frame pylon, are underway with it expected to be open to traffic early in the summer.

It was hoped Northern Spire would have been complete by May/June, but the long, harsh winter, which resulted in cold, wet and windy weather right up to the end of April, meant that work during the first four months of the year did not progress as quickly as expected.

Leader of Sunderland City Council Cllr Graeme Miller, said: “Work on Northern Spire is nearing completion and the opening is now within sight.

“It was a very long winter and the poor weather that dominated the first four months of the year meant the contractors were unable to get on with some of the final aspects of the project. Painting of the pylon requires suitable weather conditions, particularly when painting at height, and we had really poor weather for some time. Inevitably, that slowed them down.

“Given the enormity of the structure and the methodology involved in constructing it, I think the project team has done a tremendous job and we are delighted to be now looking towards completion.” 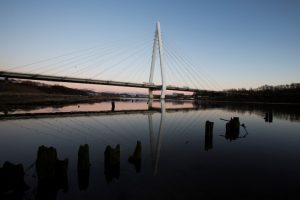 Northern Spire is the first bridge to be built over the River Wear in more than 40 years. It will link Castletown to the north of the river with Pallion in the south and is part of a wider plan to improve the road network between the A19 and the Port of Sunderland and Sunderland City Centre.

The new bridge will reduce congestion and journey times around the city, attract investment and enable swathes of land along the river to be regenerated.

Sunderland City Council believes it will be the beginning of a new era in the city, leading to job creation, an economic boost to local businesses and a rise in local pride and confidence.

Mark Jackson, Head of Infrastructure and Transport at Sunderland City Council, said: “We always said this would be a three-year construction project and it has been. With a project of this size and complexity, one of the challenges was always going to be the weather.

“As a team, we have ensured throughout that the quality and finish of the bridge remained at the heart of everything we did, so have made progress as and when the weather permitted. We have not allowed it to compromise the project at all. We are nearing completion now and it’s great to have the opening day just ahead of us.”

Mark said Northern Spire was more than just a bridge across the river.

“I don’t think we can over-estimate the difference Northern Spire will make to the city,” he added.
“It is the second part of a five-phase plan to improve the road network around the city, which will make it easier for people to access the A19, the Port of Sunderland and generally get around the city.

“However, just as Northern Spire has changed the Sunderland skyline, so too it will change the fortunes of the city. Alongside new developments like the International Advanced Manufacturing Park, it will help attract commerce and industry, will lead to new communities and businesses being developed along the river, and will bring with it a new energy and confidence. In the bigger scheme of things, we are very much on track.”

The last finishing works to the deck and pylon, including painting, which are all heavily weather-dependent, are scheduled to be completed in the coming weeks. After the bridge is open, minor works, such as paint finishing under the deck, may continue.

Northern Spire has been designed and built to last at least 120 years. More than 2,000 people have worked on the project over the past three years during a million man-hours.

It is Phase 2 of the Sunderland Strategic Transport Corridor, which aims to improve links between the A19 and Sunderland City Centre and the Port of Sunderland. Phase 3 of the scheme has been granted planning permission and will run from Woodbine Terrace in Pallion, where the Northern Spire phase ends, onto the city centre, where Phase 1 along St Mary’s has already been completed.

The new dual carriageway delivered within Phase 3 will go under the Queen Alexandra Bridge, through Deptford, and will link into St Mary’s Boulevard, next to the Vaux site, opening up more development sites and opportunities along the river.

Work on the new road will begin next year and is expected to be finished and open to traffic in 2021.

Stephen McCaffrey, Project Director for Farrans Construction and Victor Buck Steel Construction, which formed FVB Joint Venture to deliver the project on behalf of Sunderland City Council, said: “We feel enormously privileged to have been able to work on Nothern Spire, so are immensely proud that we are entering the final stages of work.

“With a project of this size and nature, there were always going to be challenges, and we knew the weather was something we could do little about. The wind, rain and very cold temperatures have been an issue for us this year, but we are happy to be completing the finishing works on the deck and pylon.

“There will still be some minor works to complete once the bridge is open, but that is usual for large construction schemes like this. It’s been a project that I think all of us will remember for the rest of our careers.”

The Story so Far video, which summarises the three-year construction project, can be viewed and downloaded here. The film tells the story since work began in May 2015 using a mix of timelapse footage, drone shots and interviews with people involved in the project.