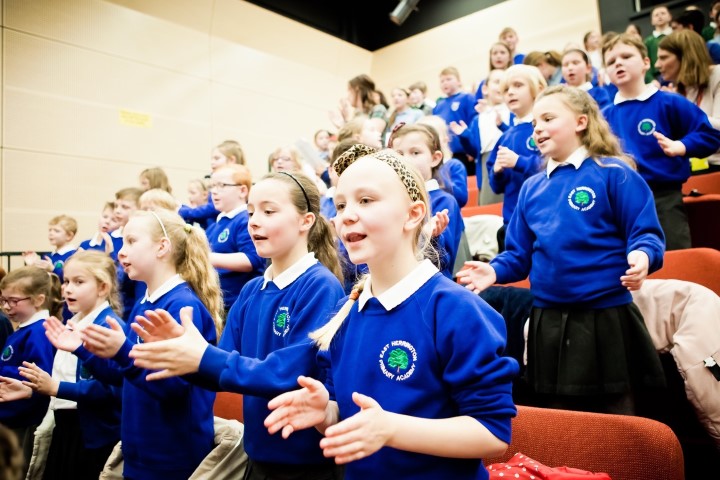 Schoolchildren across the UK are being urged to take part in a ‘big sing,’ in an attempt to break a world record.

The Massed Sing is the brainchild of Sunderland Music Hub and NYMAZ, working in close collaboration with the organisers of The Tall Ships Races Sunderland 2018 – a four-day ‘festival of sail’ taking part in the North East city from 11-14 July.

As host port for the international event, Sunderland has lined up a packed programme of music, entertainment and activities, before the 50 ships taking part in the races depart for the starting line at Esbjerg, Denmark.

And as part of the celebrations, they hope children across Britain will join around 40 Sunderland schools in an effort to break a world singing record.

On Wednesday 11 July, 20 Sunderland school choirs will perform on a specially erected stage against the dramatic backdrop of the Tall Ships, with further schools singing at the Sunderland Empire theatre.

The Tall Ships stage performance will be live-streamed to enable other schools throughout the UK to join in from their classrooms and share the excitement of the day.

The online stream link will go live from 9.45am to 12.30pm on the day and organisers are asking schools wishing to take part to learn three songs; Jack He Was a Sunderland Lad, Three Little Birds and Heroes, We Could Be.

They will then be able to join at 11am and the hope is that sufficient children will take part to set a new, massed singing record.

The website also provides free educational resources, and information on how to access the lyrics and score for each song, with maritime and musical activity ideas so teachers can also plan lessons around the theme of The Tall Ships Races.

Cllr John Kelly, Sunderland City Council’s Portfolio Holder for Communities and Culture, said the initiative is “a wonderful opportunity for children to take part in something that’s fun and that unites them with other children across the country.

“After all, we are a maritime nation,” he said, “and this is a great way for children to learn a little bit about that maritime heritage and to maybe set a new world record at the same time.”

Rebecca Pedlow, manager, Sunderland Music Education Hub, said: “We are thrilled that we could have 1,000s of children celebrating The Tall Ships Race coming to Sunderland.

“The aim of broadcasting the event live, along with the choice of songs, is to make it as inclusive as possible so any child in Sunderland and beyond can join in.”

The Massed Sing has been organised by Sunderland Music Hub, Sunderland City Council, Together for Children and digital music education project Connect: Resound which is led by youth music charity NYMAZ, in partnership with Charanga.

For full details of how to take part in the Massed Sing visit www.connectresound.live

Information about The Tall Ships Races Sunderland 2018 and the schedule of events planned throughout the four-day festival, visit www.tallshipssunderland.com