Sunderland school has a record win 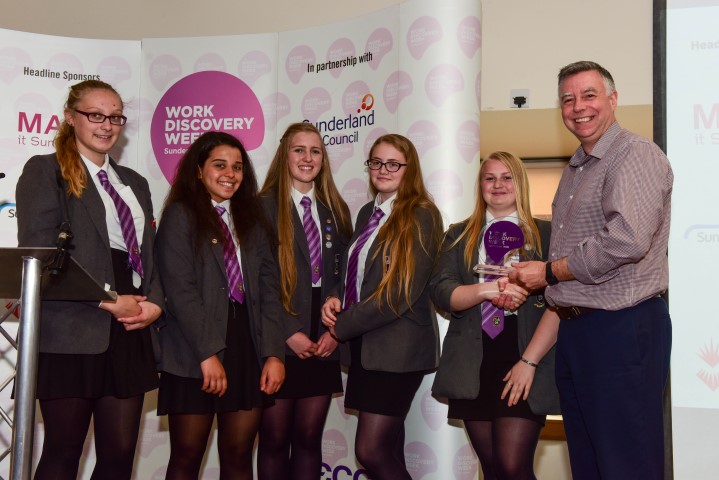 The winning team from Monkwearmouth School with John Barnett, Operations Director of Calsonic Kansei, which sponsored the final day of Work Discovery Week.

An innovative project to turn LP records into clocks has helped a Sunderland school scoop a major award.

As part of last week’s Work Discovery Week, students from a number of schools competed in a business problem solving challenge event, which was held at Sunderland’s Stadium of Light on Friday (29 June).

And while imaginative ideas, including an app to find missing pets, a way to help disabled people communicate better and the use of technology in school gym clothes ,all won the praise of the judging panel, it was the team from Monkwearmouth School which took first place.

The pupils impressed a panel made of business experts from across the city, with their money-making upcycling project which saw them turning vinyl records into attractive wall clocks.

The group of young people had already successful sold a number of the clocks and were planning to continue to raise money from them.

John Barnett, operations director at automotive parts maker Calsonic Kansei Europe, which sponsors the final day, said the standard this year was higher than ever.

“I never fail to be amazed at the fantastic ideas the city’s young people come up with every year,” he said.

“And I can honestly say I think this year has been one of the best yet, with some really well thought out ideas and presentations.”

Pupils from each of the participating schools each made a presentation and then have to think on their feet, taking questions from the floor.

“It’s hard enough for adults to stand up and speak without then having to take questions,” he said.

“Everyone who took part was fantastic and all of the ideas really were exceptional.”

Sunderland’s Work Discovery Week saw around 1000 young people from across city take part in a range of activities through the week, including a launch day at the Stadium of Light which included workshops, hands-on activities and a careers fair.

The event is supported by Sunderland City Council, SAFC and the NEECC as well as being sponsored by a range of businesses including the University of Sunderland, Sunderland College and MAKE it Sunderland.

Runner-up in the problem-solving challenge was Sunderland’s Venerable Bede CE Academy with their idea of adapting current clothing technology to use in school gymwear.

Work Discovery Week is now in its sixth year of helping improve the employability of young people from across the city of Sunderland and is part of the wider Work Discovery Sunderland programme.