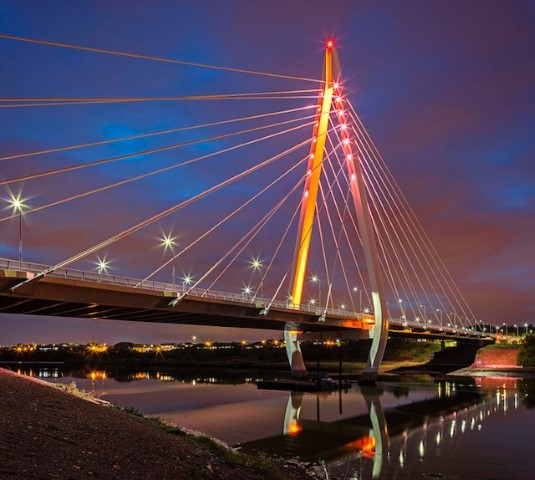 The landmark bridge across the River Wear, with its majestic 105m central A-frame pylon, was opened at 11.10am, with the first members of the public driving, riding and walking across seconds later.

Northern Spire is the result of an innovative three-year construction programme that saw 2,000 people work more than a million hours to build the impressive crossing, which is now the tallest structure in North East England .

Members of the public were given an opportunity to walk across the bridge before it opened, with thousands of people turning out to stroll across the 340m deck.

“It is a great honour to be here today to open this landmark bridge,” said Cllr Miller.

“Northern Spire isn’t just an asset for our city, but one for the wider region as a whole. In Sunderland, it will act as a catalyst for regeneration and investment on both banks of the River Wear and will help to create over 6,000 jobs in a city that is signalling its ambition with investment and making it absolutely clear that we’re open for business.

“Of course, the benefits go beyond the economic ones and this stunning structure will not only allow our communities to move around the city more easily, but it will instil a sense of confidence and pride for our residents in the place they call home.

“All of this said, it is no wonder that the council fought so hard over many years to make this happen and to ensure that Northern Spire exists in its current, impressive form. It’s taken three years to build, but many more years in gaining support locally, regionally and nationally, and we should all feel incredibly proud of what has been achieved.” 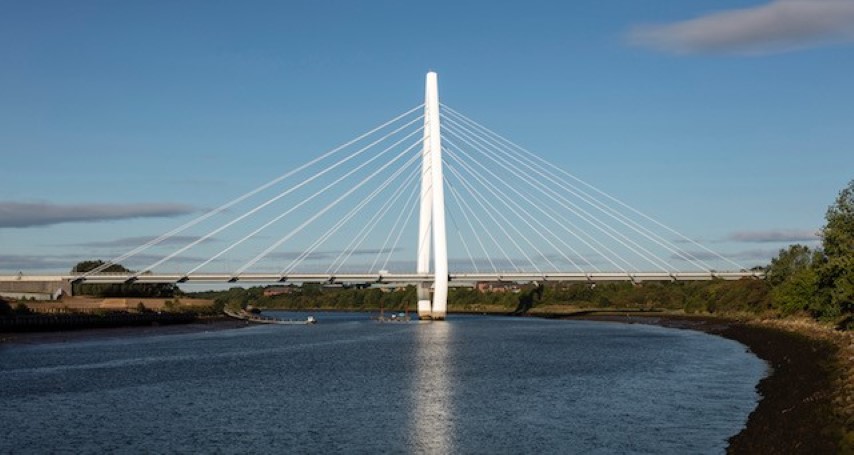 After the ribbon was cut, Cllr Miller, Stephen McCaffrey, Mayor of Sunderland Cllr Lynda Scanlan and Sunderland City Council Chief Executive Patrick Melia were escorted to three waiting Sunderland-built Nissan vehicles, including the record breaking Qashqai and 100% electric LEAF, which were the first vehicles to officially drive across the completed bridge.

Stephen said: “It is with immense pride and satisfaction that I’m here at the opening of Northern Spire.

“It has been an incredible construction project to be involved in, with so many challenges and complexities, and I think I can speak for the whole team when I say that it’s something we will all remember for the rest of our careers. Projects like this, with all of its unique methodologies and milestones, such as the raising of the central pylon and the launching of the bridge deck across the river, don’t come along very often.

“Of course, it could not have been achieved without the ambition and foresight of Sunderland City Council, whose determination and hard work to make it a reality began decades ago.

“As Project Director, however, I would also like to pay tribute to everyone who has worked on this project. We have had an amazing team of people, both from the local area and wider North East, as well as from overseas, and it is their talent, skill and experience that has brought this bridge to life. Everyone should feel proud of their efforts.

“Northern Spire is a beautiful structure. I hope the people of Sunderland take it to their hearts as much as the team on site has.”

Work began on Northern Spire in May 2015. It links Pallion, south of the river, with Castletown, to the north, and is the first bridge to be built across the Wear in more than 40 years. It will open up land for regeneration, reduce congestion and journey times around the city, and help to boost the economy.

It has been built within its £117m budget and is part of a wider five-phase plan, the Sunderland Strategic Transport Corridor (SSTC) by Sunderland City Council to improve the road network between the A19 and Sunderland city centre and Port of Sunderland. The next phase, a dual carriageway between Northern Spire and the city centre, is expected to be complete in 2021.

Mayor of Sunderland Cllr Lynda Scanlan said: “Northern Spire is a beautiful structure that has already become a landmark for the people of Sunderland.

“It’s a very visual example of the city’s ambitions, and I think we have all really enjoyed watching it develop over the last three years. I’m sure people are very excited to start using it.”

Traffic volumes travelling across Northern Spire are expected to be heavy in the first few weeks after opening as people are eager to use the bridge for the first time. Motorists are urged to drive carefully, stick to the speed limits, and to follow the signs across the bridge and its new roads to the north and south of the river.

He said: “Northern Spire is far more than a bridge to travel across the River Wear. It will reduce congestion and alleviate traffic off Sunderland’s other bridges, but it will do so much more besides.

“This bridge is part of the city’s wider plans to regenerate key sites along the river, attract investment into Sunderland, boost the economy and local businesses, and give our communities a new sense of pride and vigour.

“The opening of Northern Spire today signals a new era for the city. It’s an incredibly exciting time to be living and working in Sunderland.”

During the opening ceremony, Cllr Miller paid tribute to the Late City Council Leader Cllr Paul Watson, who led the campaign to build the new bridge in Sunderland. Cllr Watson was a frequent visitor on site, watching the construction process keenly, but he sadly died in November last year before seeing the bridge complete.

Cllr Miller said: “I really wish to pay tribute to Cllr Watson, my predecessor as Leader, who was central to the campaign to bring the Northern Spire, as we now know it, to Sunderland and its people. I’m sure Paul will be looking down on us today as passionate as ever, feeling extremely proud of how it has turned out.”