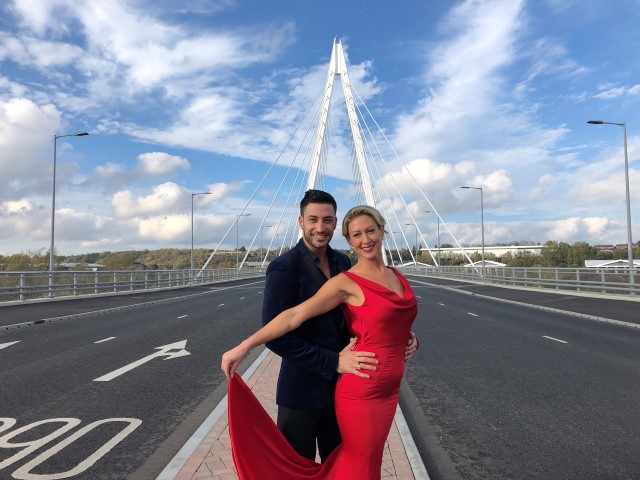 The stunning new bridge, which opened to traffic at the end of August, took centre stage as it hosted dancing favourites Faye Tozer and Giovanni Pernice during one of their rehearsal sessions earlier this week.

The bridge, boasting its 105m-tall central pylon, was beautifully showcased during the BBC flagship show, which last week attracted an audience of 11.9 million, as actress and former Steps popstar Faye and Italian professional dancer Giovanni practiced their Foxtrot routine on the bridge deck.

Sunderland City Council invited the couple to be the first to dance on the new bridge to celebrate Faye’s connection to the city. Faye is married to a Sunderland businessman and lives just a few miles from Northern Spire.

On Tuesday afternoon this week, amid a veil of secrecy, the bridge was temporarily closed to allow the Strictly film crew to capture Faye and Giovanni practising their moves on the deck, directly under the pylon, which is the North East’s tallest structure.

The BBC had requested that their visit to Northern Spire be kept under wraps until the programme aired on Saturday night.

However, we can now reveal all and say that both Faye and Giovanni were the perfect guests.

Wearing a beautiful, long red satin gown and looking every inch the glamorous TV celebrity, Faye gushed: “I’m very proud and honoured to have had the experience of dancing across Northern Spire.

“It’s a beautiful bridge and the views across Sunderland are pretty amazing. We have had a great time.”

Giovanni, who is enjoying his fourth series on Strictly, said practising on the bridge deck was far more interesting than practising in a dance studio.

He said: “It’s a beautiful bridge, with a beautiful view. It was a really nice place to be rehearsing.”

The couple, who are among the bookies favourites to win Strictly 2018, were awarded an impressive 33 points for their Foxtrot on tonight’s show, produced at the BBC’s Elstree studios in London.

During the pre-recorded section of the show, as Faye and Giovanni were driven to the bridge in a Nissan Qashqai, Faye said “So I have brought Giovanni to Northern Spire, which is the North East’s tallest structure. It’s only been open for six weeks, and they have closed it for us. Isn’t it amazing? We have been able to practice a little bit of our Foxtrot moves. ”

The couple danced beautifully, but it won’t be revealed until tomorrow night’s show (Sunday) whether the couple have received enough public votes to make it through to next week in the competition.

Costing £117m, jointly funded by Government and Sunderland City Council, it is speeding up people’s journeys around the city and reducing congestion on Sunderland’s other bridges across the River Wear. However, Northern Spire will also enable land along the south side of the river to be regenerated, will attract investment into the city, and will boost confidence and pride among residents.

He said: “Sunderland is both delighted and honoured to have had Faye and Giovanni practising their routine on the deck of Northern Spire this week. We wholeheartedly thank them for taking time out of their busy schedules to come and see us.

“They are both incredible dancers, so we feel sure they are going to go far in this year’s Strictly competition. I’m sure the whole of Sunderland will get behind them and vote them through each week, so they make it to the final in December.

“It’s only right that they danced under Northern Spire’s impressive central pylon because the sky has to be the limit for them. It’s a fitting backdrop to a very talented couple.”

Cllr Miller thanked members of the public for their patience and understanding when Northern Spire closed on Tuesday to enable filming to take place.

He added: “We take road closures very seriously, and try to avoid them unless we have good reason. It’s not every week that one of the biggest shows on TV wants to come and film in your city, so we thought it was a wonderful opportunity to showcase our newest landmark, Northern Spire, to the rest of the country. The footage was amazing, so now everyone can see why we are so proud of it.”